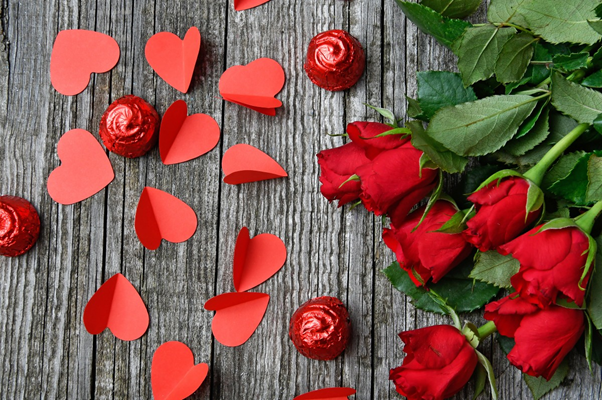 Valentine’s day has come and gone and those of you feeling lighter of wallet, or who have enjoyed the largesse of your valentine, might wonder its origin. I certainly did, having enjoyed a lovely meal at the Pear Tree Inn in Woodhouse Eves. Having done a little bit of research all that is clear is that nothing is clear when it comes to St Valentine!

Firstly, the Catholic church have at least three different saints named Valentine or Valentinus, all of whom were martyred.

One legend contends that Valentine was a priest who served during the third century in Rome, who to overcome the outlawing of marriage for soldiers, as Caesar believed single men made better soldiers than those with wives and families, defied Caesar by performing marriages for young lovers in secret. This did not end well for Valentine as Caesar ordered that he be put to death!

Others insist that it was Saint Valentine of Terni, a Bishop, who was the true namesake of the holiday. He, too, was beheaded by Caesar outside Rome.

An alternative legend suggests Valentine may have been killed for attempting to help Christians escape harsh Roman prisons. An imprisoned Valentine sent the first “valentine” greeting himself having fallen in love with a young girl – possibly his gaoler’s daughter – who visited him during his confinement. Before his death, it is alleged that he wrote her a letter signed “From your Valentine,” an expression that is still in use today.

Or does the truth lie with the Christian church, which placed St. Valentine’s feast day in the middle of February to “Christianize” the pagan celebration Lupercalia held around February 15? This was a fertility festival dedicated to Faunus, the Roman god of agriculture, as well as to the Roman founders Romulus and Remus. You can surmise what that was all about.

Now I clearly cannot offer any romance in your approach to career choices or hiring criteria, but I would hope ABPM can be your Cupid (a whole other story here for another time) when it comes around to supporting you in the vital area of being your recruitment partner!

In a buoyant careers market as we emerge from the covid era, we look forward to hearing from you across the Finance and IT disciplines.